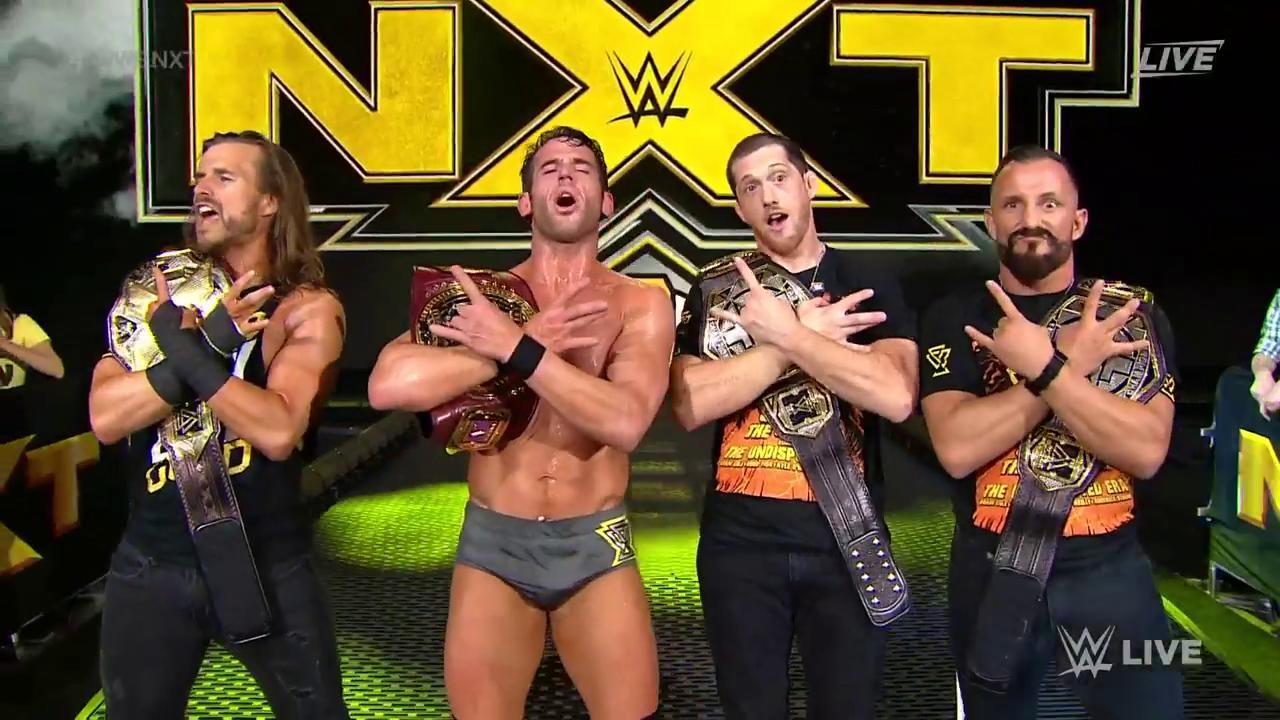 A.K.A. The Start Of A New Undisputed Era For NXT

Welcome to the beginning of a new era. Tonight was the beginning of NXT going live from Full Sail University on USA Network. We had three matches in the first hour of NXT before it moved to the WWE Network for the second hour. First there was the fatal fourway match to determine the challenger for Shayna Bazler’s NXT Women’s Championship. The second was a quick match between Cameron Grimes and Sean Maluta. The final match in the first hour was Velveteen Dream defending his North American title against the “Mesiah of the Backbreaker” Roderick Strong.

The second hour of the show saw five more matches. The first was a solid match between Pete Dunne and Arturo Ruas. We then saw some of the less experienced women’s talents as Xia Li took on Aliyah. Kushida then was scheduled to have a match but we will get into that later. Then a pleasant surprise of a match as Lio Rush made his return to challenge Oney Lorcan in a Cruiserweight Championship number one contenders match. The show then ended with a street fight between Matt Riddle and Killian Dain. Let’s get into this historical night.

Match of the Night: Mia Yim vs Candice LeRae vs Bianca Belair vs Io Shirai

There were so many fantastic matches on tonight’s show that I would consider better than most of the ones from Clash of Champions this past weekend. However I have to go with the womens fatal 4-way match as match of the night. This was the first ever live TV match on NXT. There’s a lot of pressure in that so for the women to deliver as they did was incredible. Candice LeRae did get the pin over Mia Yim with the poisionrana into the lionsault. This match was a showcase match. Every superstar in this match was able to hit their signature moves. It’s a way to introduce women talent to the casual fans who are tuning in for the first time to NXT. Hopefully we can see more women’s matches like this and not like the one later in the show.

Tonight Roderick Strong challenged Velveteen Dream to an title match for the North American Championship. Roderick was the only member without a belt in the Undisputed Era so it was his chance to get some gold around his waist. Both of these fantastic stars put on a heck of a match. Towards the end the UE distracted the ref so Adam Cole could superkick The Dream and allow Strong to hit him with an End of Heartache for the three-count. With Velveteen being as over as he is, it wouldn’t surprise me if he goes after Adam Cole’s NXT Championship next.

If you’re a fan of 205 Live, I have got good news and bad news for you. The bad news is that it looks like they are killing 205 Live sometime soon. The good news is that it’s going to NXT and is already much better. Tonight we had the surprise return of “The Man of the Hour” Lio Rush, who has been gone for the last six months.

Rush fought Oney Lorcan for the number one contender spot for the Cruiserweight title. This was another outstanding match and showed off Rush to people that had never seen him wrestle as he never really had a chance when he was Lashley’s mouthpiece. Can’t wait to see what’ll happen with the cruiserweight division as they start to become part of the gold brand.

The show tonight ended with a street fight between Matt Riddle and Killian Dain. As seen earlier tonight, Imperium made the trip from the UK to begin their reign of terror on NXT. During this match, Imperium, along with many other wrestlers, interfered and really turned this into a street fight. This was a fantastic way to show NXT talent. People love watching guys beat the crap out of each other. Unfortunately it did end about 10 minutes early, so they could’ve taken that time to make the match a little longer. Besides that one little problem, this street fight was incredible.

This is what LIVE #WWENXT chaos looks like! 😱😱😱😱 pic.twitter.com/XZP350PTvM

This show was incredible. With NXT going to two hours, they clearly had to go big or go home, and they definitely didn’t go home. They went all out with their matches and really made their stars shine. The matches were amazing as usual. The segments were top tier. Everything about this show made me excited for next week.

There is now one more show before NXT goes head to head with AEW. Now we have to see what they do in their in between week to set up for what should be one of the biggest nights NXT will have. The one thing we do know is that tonight showed they will go all out, pun certainly intended.

Eli Manning: “In some ways, I signed up for this…and I gotta live with it…”