In Goff We Trust: Rams Ready for Green Bay

Fitting the Bills: Buffalo’s Defense Might Have the Answer for the Ravens High-Octane Offense

Some people say that everything is bigger in Texas. Most of the time the reference is to a meal or something tangible. However, the saying holds true of Jaguars’ fifth-round rookie wide receiver Collin Johnson out of the University of Texas.

At 6-foot-6, 222-pounds, Johnson stands out in the wide receiver room. This season, he joins a group of talented receivers in Jacksonville that are all trying to find their identity. Johnson will not be an exception.

In Goff We Trust: Rams Ready for Green Bay

Unfortunately, this off-season is like no other for the NFL, and Johnson will be asked to catch on quickly once the team is allowed to practice. In order to see time on the field as a rookie, Johnson will need to achieve three goals during the abbreviated training camp.

Despite his imposing size, Johnson has difficulty with being aggressive at the line of scrimmage. He struggles to create separation early in the route. Therefore allowing a smaller defender to be able to combat catches. Thankfully, this weakness is correctable and coachable.

In order to be successful at the next level Johnson must become mean and impose his size on opponents. He will need to become the attacker at the snap of the ball, instead of the player being attacked. If he is able to mature and grasp this concept he can be a weapon for the Jaguars. The ability for Johnson to dictate a route and not have a cornerback disrupt offensive timing is imperative at this level.

Another weakness for Johnson is his inability to be a playmaker after the catch. The knock is that he does not have the elusiveness or the top gear speed. This was highlighted more last year as he battled a hamstring injury his senior year at Texas.

This off-season, Johnson will need to come into camp more fluid and slippery than the end of last year. Losing the stiffness will allow him to be more of a dynamic playmaker with or without the ball in his hands. Once again, this asset is coachable. During camp. Johnson can acquire knowledge about gaining yards after a catch from veteran wide receiver Chris Conley. He should follow Conley around and learn how to be a pro on the field and in the classroom. 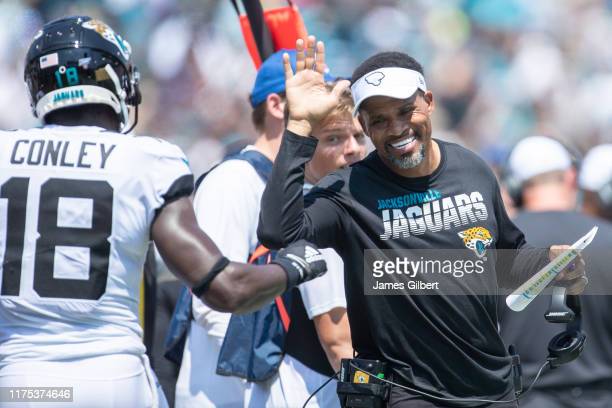 At the next level, Johnson needs to become more than a one-trick pony. At his height he is naturally an enticing target in the red zone. Or perhaps 40/50 jump ball situations. But then again, he could be so much more. Leave that to Jaguars wide receiver coach Kennan McCardell.

His big frame can shield a defender to pick up short yardage on a slant for a third down conversion. He can also be a presence in the middle of the field between the hash marks. This was an area of the field that was not utilized by the Jaguars in 2019. Under the tutelage of Conley and McCardell, Johnson can make an impact this season. By polishing up his routes, he will see the field more as a rookie.

The 22-year-old from Texas is a project for the Jacksonville Jaguars, especially in this shortened preseason. However, Johnson has the physical traits to grow into a playmaker. His development will not take place overnight. But he is a solid character and is eager to learn. With his hamstring injuries behind him, the Jaguars hope Johnson becomes a fifth-round steal and a cornerstone for the future.

The NHL Is Set Up To Restart And Finish Its Season

LeBron, not Michael, is the Greatest of All Time