This Or That: Derrick Johnson Or Tamba Hali?

It’d Be Nuts To Re-Sign Rask, Halak Now … And Other Bruins Thoughts

Joel Farabee Is A Super Sophomore For the Philadelphia Flyers

Joe Is Right, Tom Brady Is The G.O.A.T

Faneca: Hines Ward “Absolutely, 100 Percent Deserves” to Be A Hall of Famer

With the regular season all wrapped up, that just about ends the fantasy football season…oh wait! We forgot about DraftKings! Wild Card Weekend style! This weekend is especially exciting because they are introducing individual defensive players for the Panthers-Saints matchup on Sunday. But we will get into that a little bit later. First I will go over the games of this weekend with the roster suggestions that I strongly recommend. Time to get wild!

The second lowest under/over of the week, this game is very intriguing. Two teams that have struggled mightily at times this season, but still find themselves playing after Week 17. I like the Chiefs to win this game, so I additionally I like some of their assets as well in DraftKings this week. RB Kareem Hunt at $8,100 is a must-have in your lineup this week. The Titans were shredded on the ground by some guy from LA back in Week 16, so they can be beaten with an elite ground attack. Additionally, being that DraftKings in PPR, Hunt is that much more attractive because the Titans have allowed the third most receptions to the RB position in 2017.

QB Alex Smith at $6,300 is a player that I am not too excited about this week because of game script and matchup. The Titans on the road this year have averaged right around 17 points, so I am not confident that they will keep this game close. Smith also has performed worse at home in fantasy averaging 17.3 fantasy points. I think he is a safe play at home, but I am not sure he has massive upside this week. However, a notable statistic for the Titans defense is that no defense this year has allowed more pass attempts per game (37.8). Either way the Chiefs offensive players should have a productive day.

TE Travis Kelce at $7,100 is expensive, but based on the tight end landscape could be a massive difference maker. The Titans have not faced many great tight ends this season, and when they have they have given up fantasy points. The Seattle tight ends combined for over 130 yards and a score back in Week 3. And in both games against the Colts, Jack Doyle had a combined 14 receptions for over 140 yards and a score.

For the wide receivers, WR Tyreek Hill at $6,800 has just been too good to consider not putting in a lineup considering his massive upside. But if you are running low on salary and need a boost from a cheap wide receiver look no further than WR Albert Wilson at $3,300. Wilson showed us what he can do in a featured role in Week 17, but was getting more looks in the offense anyway. Wilson had 20 targets Weeks 14-16; the same as Hill during that time span. Lastly, the Chiefs D/ST at $3,400 should generate some turnovers. On the road this season, the Titans averaged 2.2 turnovers per game. That is fourth highest in the league.

Meanwhile for the Titans, it could be slim pickings. The Chiefs at home this year have allowed an average quarterback rating of 75.6 which is seventh best in the league. The only guys, I will target are RB Derrick Henry at $6,000, WR Rishard Matthews at $4,900, and TE Delanie Walker at $4,700. Henry is going to get the volume in both the passing game and ground game, so I like his total work upside. The Chiefs this season have allowed the most fantasy points to the WR position which is why I like Matthews. The Titans will also be trailing most likely in this game so they could be throwing a ton. That helps Matthews and that helps Walker as well. The Chiefs over the past four weeks have allowed the 10th most fantasy points to the TE position.

A game that will most likely end up as an shootout, I want to first highlight the Falcons defenses playing in this game. The Rams this season for whatever reason at home have averaged 1.9 turnovers per game in Los Angeles. That is fourth highest in the league. Now, obviously the Falcons D/ST at $2,000 seems like a total waste, but I think they can be a great value play this week for their cheap cost. However that being said, QB Jared Goff at $6,700 despite any turnovers should be able to put up points versus the Falcons defense. Of the teams playing today, no team has allowed a higher passer rating to opposing quarterbacks on the road than the Atlanta Falcons (98.2). RB Todd Gurley II at $9,700 is the most expensive player this week, but you can most certainly build a lineup around the fantasy football MVP.

Goff and Gurley are easy decisions this week, but how about the wide receivers?  The matchup is fantastic against the Falcons who have allowed the fourth most fantasy points to the WR over the past four weeks. I am a big-fan of the double stack with Goff so the two wide receivers, I recommend are WR Cooper Kupp at $5,800 and WR Sammy Watkins at $5,100. WR Robert Woods at $6,600 is the most expensive Rams receiver and will be drawing a lot of coverage from CB Desmond Trufant.

Even though I like Goff more, QB Matt Ryan at $6,100 is an option this week. It is riskier, but the Rams over the past four weeks have allowed the fifth most fantasy points to the opposing QB. The other skill players for the Falcons however in particular really drive my interest. I love RB Devonta Freeman at $6,300 versus the Rams that have allowed the second most fantasy points to the RB this season. He has been heavily involved especially in the passing game. He caught nine passes last week for 85 yards.WR Julio Jones at $8,000 is the most expensive WR this week, and is similar to Gurley in which the matchup does not matter, because he can #Kaboom at any time.

So if you want to pay up for guys like Jones and Gurley you need to find cheaper options at other positions. For TE, look at TE Austin Hooper at $2,900. Real cheap and the Rams have allowed the most fantasy points to the TE over the past four weeks.

Will RB LeSean McCoy at $7,500 suit up for Sunday’s tilt? I think he will most likely play and if he does, you need to play him in DraftKings. He will most certainly be at a low ownership, but Shady gets hurt all time, and is fine on the next play. But here are other reasons why you should be confident in McCoy besides the fact that he is the Buffalo Bills offense. Recently Jacksonville has been suspect against the run. Over the past two weeks they have allowed the fourth most fantasy points to the RB position. And in the last four weeks, they have nearly allowed opposing running backs 25 carries per game. McCoy is going to be featured in Sunday’s game, making him an easy roster addition.

QB Tyrod Taylor at $4,700 is dirt cheap this week and honestly is a playable asset. The Jaguars at times have struggled against mobile quarterbacks. Marcus Mariota has beaten them twice and Russell Wilson also had a very productive day against them. Not to mention over the last two weeks, they have allowed the fourth most fantasy points to the QB.

That being said, WR Kelvin Benjamin at $3,500 and TE Charles Clay at $4,000 are also startable options. Benjamin is a big-bodied receiver and may be able to out physical CB Jalen Ramsey. Clay is Taylor’s favorite target so he should see volume with the Jacksonville Jaguars focus on locking down the outside. Then taking a real deep dive here is WR Deonte Thomspon at $3,000. The Jaguars play tight press coverage, and it some instances can over pursue and get beat deep. Thompson will get at least one bomb thrown his way in this game. Also the Bills D/ST at $2,500 is another great value play.

For the Jaguars it is all about RB Leonard Fournette at $7,400. The Bills run defense is the worst in the league. Got to love him this week. The rest of the Jaguars offensive players I am less confident in. I do not trust QB Blake Bortles at $6,000 to get the job done for his price tag. The Jags will focus on running the ball, to limit mistakes by Bortles. If I need to a pick a wide receiver from the Jaguars, it will be WR Allen Hurns at $4,600. He looked good coming back from injury leading the team in receiving yards last week. He will man the slot where the Bills have been weaker at corner. If you had not picked up on it yet, I do think Buffalo wins this game 🙂

The only game of the week between divisional foes, this game has the makings of a possible shootout. In the entire regular season, the Panthers only allowed more than 30 points on three separate occurrences. Two of those times were to the Saints who have averaged over 32 points per game against the Carolina defense. The Saints are going to score, and it will be up to QB Cam Newton at $6,500 to keep Carolina in the game. That being said, the Saints defense has also been very suspect over the past two weeks, allowing the most fantasy points to the QB over that timespan.

Liking Newton however does not mean I like all of his weapons. I am avoiding WR Devin Funchess at $5,900 who will be facing CB Marshon Lattimore who missed both games against the Panthers earlier this season. Instead I will be stacking Newton with TE Greg Olsen at $5,000 who also missed those two games versus the Saints without safety Kenny Vaccaro. Olsen and RB Christian McCaffrey at $6,400 should be your targets. McCaffrey was productive in both previous matchups with the Saints this season.

For New Orleans, QB Drew Brees at $6,400 is a great option at home as the Panthers have allowed the third most fantasy points to the QB over the past four weeks. Additionally Carolina has allowed the most fantasy points to the WR as well. So fire up WR Michael Thomas at $7,800 and WR Ted Ginn Jr. at $5,200. RB Alvin Kamara at $8,600 and RB Mark Ingram at $6,900 need no explanation, but it is worth noting Ingram is on the cheaper side this week. Also that Saints D/ST at $3,200 has been particularly good at home, so I like them to generate turnovers as well.

Like I eluded to earlier DraftKings has a special Showdown Launch Special where you draft four offensive players and two defensive players. The salaries are adjusted slightly, but I would recommend either the double stack or playing both quarterbacks. For individual defensive players, I am no expert so I asked for some advice from @HBogart27 on Twitter. Here are his rankings for the defensive players. This guy knows his stuff on IDP. You can read more of his stuff by clicking here.

Good luck everybody! Have a Wild Weekend! 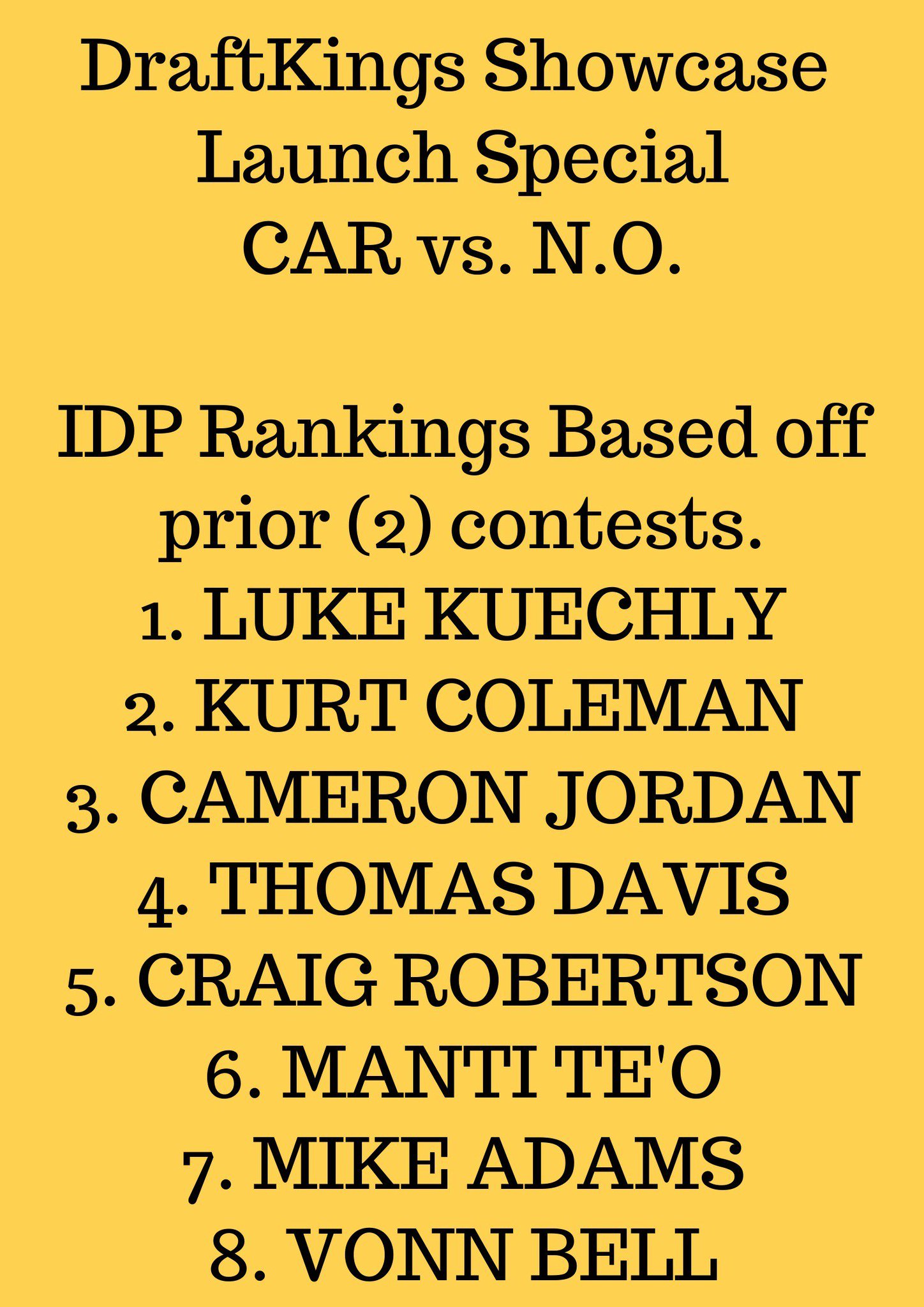 Three Questions For The Rams/Falcons Game

Kraft Speaks Out On ESPN Report

Kraft Speaks Out On ESPN Report

Can The Colts Resign Their Best Free Agents?